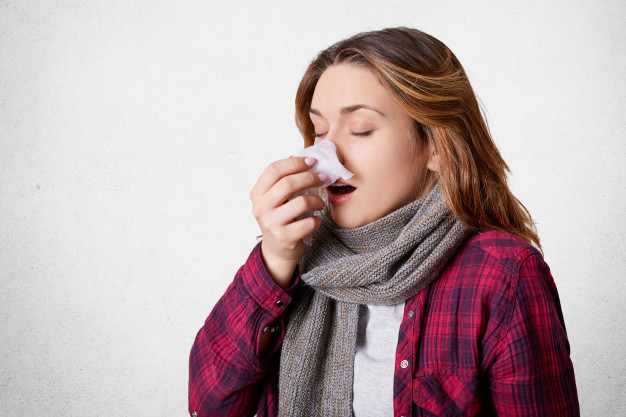 Allergic rhinitis, commonly known as hay fever – is a type of inflammation and the group of symptoms affecting the nose. But don’t be misled by the name – you don’t have to be exposed to hay to have symptoms. And hay fever doesn’t cause a fever.

Allergic rhinitis develops when the body’s immune system recognizes and overreacts to something in the environment that typically causes no problems in most people.

Hay fever shares many of the same symptoms as a common cold but is not caused by a virus or bacteria. Instead, it is caused by your immune system reacting to allergens you breathe into your body. Allergic rhinitis is not contagious.Your body’s overreaction to the allergens causes symptoms.

For further clarifications or
to fix an Appointment

Thank you for choosing us

Our experts will get back to you at the earliest

Allergic rhinitis triggered by the pollen of specific seasonal plants is commonly known as "hay fever", because it is most prevalent during haying season. However, it is possible to have allergic rhinitis throughout the year. The pollen that causes hay fever varies between individuals and from region to region; In general, the tiny, hardly visible pollens of wind-pollinated plants are the predominant cause. Pollens of insect-pollinated plants are too large to remain airborne and pose no risk. Examples of plants commonly responsible for hay fever include:

Allergic rhinitis may also be caused by allergy to Balsam of Peru, which is in various fragrances and other products.

Predisposing factors to allergic rhinitis include eczema and asthma. Additionally, environmental exposures such as air pollution and maternal tobacco smoking can increase an individual's chances of developing allergies.

Some people may experience both types of rhinitis, with perennial symptoms getting worse during specific pollen seasons. There are also non allergic causes for rhinitis including irritants such as cigarette or other smoke, perfumes, cleaning products and other strong odors. It’s time to take control of your allergic rhinitis and start enjoying life again.

People with allergic rhinitis generally experience symptoms after breathing in an allergy-causing substance such as pollen or dust. In the spring, the most common triggers are tree and grass pollen. In the fall, a common allergen is ragweed or other weed pollen or outdoor mold.

When a sensitive person inhales an allergen, the body’s immune system may react with the following symptoms (listed in order of frequency):

Symptoms also may be triggered by common irritants such as:

ALLERGIC RHINITIS CAN BE ASSOCIATED WITH:

Many parents of children with allergic rhinitis have said that their children are more moody and irritable during allergy season.

It is important that the irritability or other symptoms caused by allergy symptoms are not mistaken for attention deficit disorder. With proper treatment, symptoms can be kept under control and disruptions in learning and behavior can be avoided.

Many people have recurrent or chronic nasal congestion, excess mucus production, itching and other nasal symptoms similar to those of allergic rhinitis. In those cases, an allergy may not be the cause.

The risk factors for allergic rhinitis include the following:

Increased risk of occupational rhinitis has been found in the following professions:

Occasional allergies aren’t just something you have to live with. Consulting a doctor is the most effective way to diagnose and treat allergic rhinitis symptoms and help you find relief.

Sometimes allergic rhinitis can be complicated by several medical conditions, such as a deviated septum (curvature of the bone and cartilage that separate the nostrils) or nasal polyps (abnormal growths inside the nose and sinuses). Any of these conditions will be made worse by catching a cold. Nasal symptoms caused by more than one problem can be difficult to treat.

The first approach in managing seasonal or perennial forms of allergic rhinitis or hay fever should be to avoid the allergens that trigger symptoms, if possible.

Several medicines can be used to treat allergies. Your doctor will help you determine what medicine is best for you depending on your symptoms, age, and overall health. These medicines help prevent symptoms if you use them regularly, before you’re exposed to allergens.

Allergy testing is not definitive. At times, these tests can reveal positive results for certain allergens that are not actually causing symptoms, and can also not pick up allergens that do cause an individual's symptoms. The intradermal allergy test is more sensitive than the skin prick test, but is also more often positive in people that do not have symptoms of that allergen.

Several mechanisms responsible for the effects of acupuncture have been suggested, including the release of neurochemicals, such as β‐endorphins, enkephalins and serotonin. Another theory suggests that the effects of acupuncture may be the result of the regulation of the autonomic nervous system, by altering sympathetic and parasympathetic nervous system activity or by increasing local blood flow and nitric oxide production .

In allergic rhinitis, acupuncture could act as a modulator of anti‐inflammatory cytokines and by neuroimmunological mechanisms, e.g. lowering plasma levels of vasoactive intestinal peptide and substance P.

A German pragmatic trial suggested that treating patients with allergic rhinitis in routine care with additional acupuncture leads to clinically relevant and persistent benefits . Additionally, ear acupressure for allergic rhinitis was shown to be as effective as body acupuncture or antihistamine treatments for producing short‐term effects. However, ear acupressure was more effective than antihistamines for long‐term effects. Acupuncture may help to improve blood rheology indexes by causing an increased volume of blood flow. Additionally, it may regulate the immunological functions of the human body and thus provide therapeutic effects

The main meridians that provide for circulation of the defensive Qi are the lung, colon, stomach and spleen meridian — the meridians of the anterior circulation. Allergy in the viewpoint of Traditional Chinese Medicine is a “wind” disease that penetrates from externally together with “cold” or “heat” and impedes the defensive Qi flow in the lung, the skin and the mucous membranes. This results in a backup (fullness) or a deficiency (emptiness) of the defensive Qi leading to the development of the typical symptoms of allergies such as swelling, watery secretion, sneezing, allergic eczema and conjunctivitis. The diagnostic approach in TCM and the conclusions gained from this knowledge are difficult to comprehend from the viewpoint of western medicine and have little in common with our perceptions on the pathogenesis of allergy.

In a prone position:

The acupuncture point as such has in the meantime been studied and characterized anatomically and physiologically. Anatomically, the majority of the acupuncture points (up to 80 %) represent perforations in the superficial body fascia, through which blood vessels and nerve bundles reach the skin embedded in loose connective tissue. It has been shown that these points have a higher density of receptors and to a great extent (up to 71 %) represent myofascial trigger points. From a physiologic viewpoint a higher electric conductivity and ion exchange capacity of the connective tissue can be demonstrated at the acupuncture point. The peripheral circulation of the skin and of the muscles is supposed to be improved as well as regulatory mechanisms of the vegetative nervous system to be modulated. Further, it is assumed that endorphins, enkephalins and dynorphins are released.

However, also other diseases can be influenced in their chronic or their acute phase. Several times an impact on the immune system has been demonstrated. Acupuncture is assumed to modulate the activity of natural killer cells, lymphocyte proliferation, chemotaxis and phagocytosis . Also a reduction of the eosinophil count in the blood and nasal secretion was observed.

Acupuncture is presumably capable of influencing the cytokine profile. Several studies on bronchial asthma and allergic rhinitis describe in patients a modulating effect of acupuncture on the cytokine profile with simultaneous improvement of signs and symptoms. It is remarkable that through acupuncture the production of not all cytokines is altered. Particularly affected by acupuncture are Interleukin-10, Interleukin-2 and Interferon γ. Beyond these cytokine-modulating effects, some authors also report a reduction of Immunoglobulin E concentrations in the blood. Despite the lack of studies on the direct relationship between cytokine alterations and the reduction of symptoms, these studies suggest that this is in fact connected with alterations of cytokine production.

Looking for the best relief for allergic rhinitis in Chennai, here’s why you should reach out to the expert Acupuncturist Dr. Shaji Bharath from the best rated clinic Dr.Bharath’s Acu Heal. He is currently treating patients for a wide range of conditions. As a best acupuncture practitioner with 15 years of experience, and having worked with several Urologists,Dermatologist, Neurologists and Otolaryngologists, Dr.Bharath can create the treatment plan for the best cure for Allergic rhinitis to manage the condition that's tailored to your needs, which can break a cycle of repeated running nose. As the top acupuncture doctor for the allergies in Chennai, he has witnessed acupuncture doing wonders on people suffering from allergic rhinitis. The effectiveness rate increases several times just with one course of Acupuncture and a specialized expertise in allergies are warranted. So, take some time to find the right management for hay fever and the best remedy for acupuncture approach that suits you. Most of the people swear by acupuncture, citing it as a best cure and a ‘miracle’ in improving their quality of life.

Dial: +91 9884746916 or Visit: drbharathsacuheal.com for more details on treating all types of allergies using Acupuncture,by contacting the top acupuncture doctor in Chennai.

TREATMENT FOR ALLERGIC RHINITIS WITHOUT SIDE EFFECTS

Intranasal corticosteroids are the preferred medical treatment for persistent symptoms, with other options if this is not effective. Second line therapies include antihistamines, decongestants, cromolyn, leukotriene receptor antagonists, and nasal irrigation.Antihistamines by mouth are suitable for occasional use with intermittent side effects. While treated using Acupuncture,the patient gets effective treatment with no side effects. The Acupoints are carefully chosen by our expert to treat Allergic Rhinitis. Acupuncture is effective for rhinitis, specifically targeting the sphenopalatine ganglion acupoint.

BEST ACUPUNCTURE DOCTOR NEAR ME

To choose the Best doctor for Acupuncture, it's important that the Acupuncturist should have a decade of experience and treated at least 1000 to 2000 patients.

The Best Acupuncture Doctor should address your concerns and help you feel more comfortable before your first session. Acupuncture usually takes numerous sessions or several weeks to get a complete cure in any ailment but within 3 or 4 sessions the patients will experience positive differences.

BEST ACUPUNCTURE CLINIC NEAR ME

We have been rewarded a 5-star rating from Google & Practo. You can also check the reviews there.

Allergic rhinitis is the type of allergy that affects the greatest number of people. The remedies in this article might not work for everyone as it has got several side effects. But, if you live with severe allergic rhinitis, you may still want to consult a doctor, You can book an appointment with our Acupuncturist using our email i.d drbharathsacuheal.com.

For further clarifications or
to fix an Appointment

Thank you for choosing us

Our experts will get back to you at the earliest


What are the services provided for allergic rhinitis by Dr. Bharath’s Acu Heal?

The Acupuncturist will understand the condition of the disease only after doing a thorough investigation by pulse and tongue diagnosis. Acupuncture treatment will be given based on the disease’s chronicity and acuteness. In the first few sessions, there will be positive changes in the symptoms and after few more sessions, there will be a 90% to 100% chance that the patient will get cured of Allergic Rhinitis. The patient will be advised on a diet with food restrictions, exercise regime which includes a sound sleep that plays a vital role in reversing the disease.

What are the benefits of acupuncture for allergic rhinitis?

This is a drugless therapy and so there are no side effects. After completing the course of treatment any form of medication can be stopped.

How many sessions of acupuncture do you need for allergic rhinitis?

Get your freedom from ailments using Acupuncture without side-effects! Our Specializations

Get your freedom from ailments using Acupuncture without side-effects!

Get your freedom from ailments using Acupuncture without side-effects! Our Specializations